A practical challenge people have when they enter a new firm, school or social organization is figuring out how things “work” there. Sometimes you might ask yourself “how do I get people on board with my new idea” or “who really makes the decisions here” or “who should I talk to in order to get the latest gossip”? Our instincts are to answer these questions by resorting to two types of information we can easily gather:

But for every example of the above, we have all seen examples of the exact opposite. In fact, some might argue that we see more contradictory examples than we see confirmatory ones. This raises a puzzle: Why are individual traits only sometimes predictive of the things we care about?

Network analysts suggest that answering the who people are and what people are questions is insufficient for understanding power and influence. Answering these questions will give you only crude signals for what you are trying to learn about: power, influence or knowledge. The underlying causal force is actually people’s social networks: the pattern of social relationships that link people together in an organization or community.

Who’s got the power?

Consider the following R&D unit in a large technology firm called Micron (name changed). Alexis was recently hired to help turn around this unit as Director of R&D. She is a recent graduate of a top MBA program and was previously a product manager for a breakthrough consumer app. Her references all praise her deep technical knowledge and her superb leadership and organizational skills.

Micron has been facing some big challenges in their R&D unit over the past few years. For instance, the R&D team has lost two Directors over the past three years. The unit has also been unable to produce any new breakthrough product ideas or technologies.

Micron is really counting on Alexis to figure out what the problem is and to fix it.

Today, the unit consists of three teams (Design, led by Waylon; Hardware, led by Justine; and Software, led by Chris.) The design team has three additional members (Case, Brogan and Rodrigo), the hardware team includes Frank, April and Kinley and the Software team consists of Leo, Eva, Sasha and Kim.  The formal organizational chart of Micron is depicted below.

Alexis is an astute student of organizational politics. She knows that fixing things in any organization starts by answering the following question: Who has got the power? 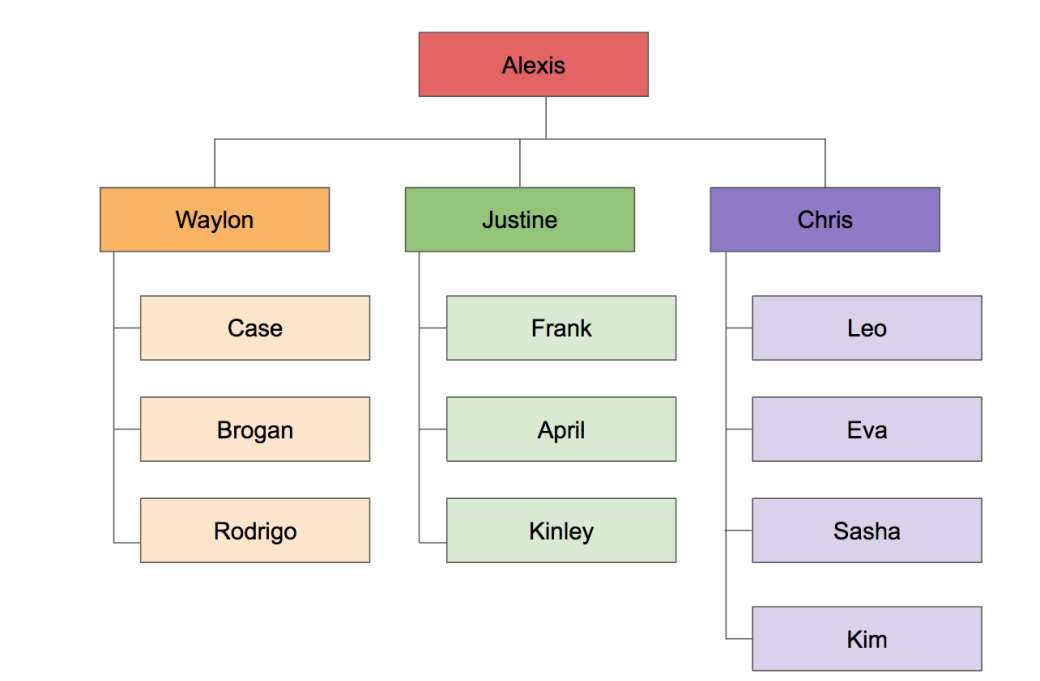 Obviously, I haven’t given you the necessary information to help you answer this question yourselves. But a smart observer might come up with the following answers:

To answer this question we must begin by asking: What is power?

Power is the ability to mobilize resources to get things done.

Breaking that answer down, powerful people are those who can get access to scarce resources faster than others, convince other people to act in a certain way or towards a certain goal, and see the potential political obstacles in the way and have the support but also foresight to avoid these obstacles.

The answer to the power question, according to network theory, is: people who are in central positions in social networks are powerful. They are privy to knowledge (through their social ties) that not everyone holds, they can influence others through their social relationships, and see better than others the political obstacles in their way.

Lets begin by looking at another graph. Below, I’ve plotted a network where the nodes (the ovals with names in them) represent the same people we saw in the organizational chart above. The nodes are connected to each other by edges which in this case represent mutual advice giving and receiving (but could represent other relationships such as trust or friendship). By looking at this graph, who do you now think is the most powerful person in this unit? 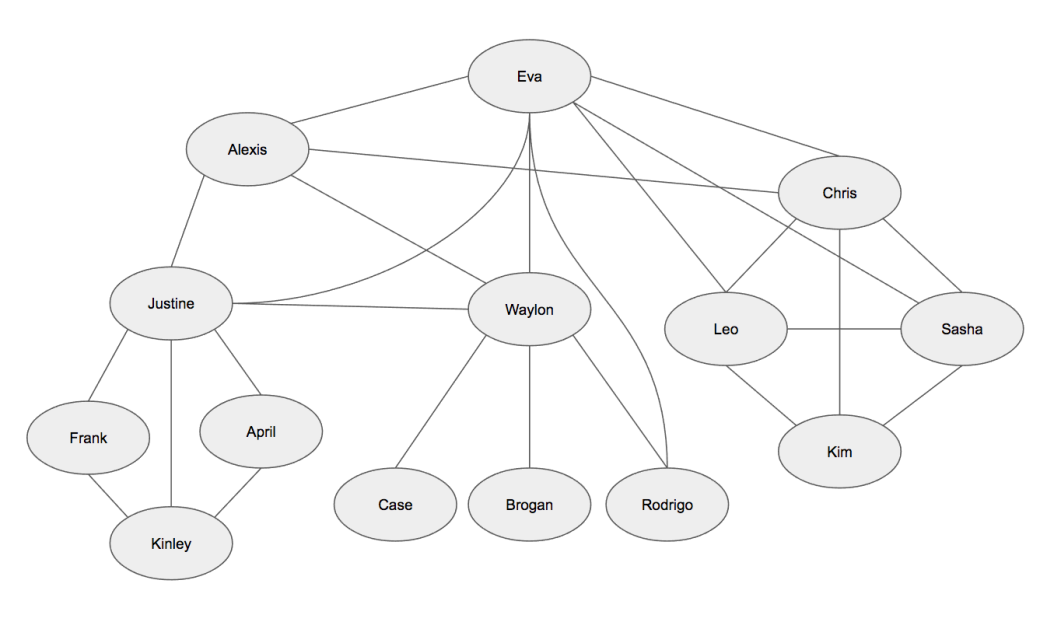 The answer appears to be Eva. She is connected to more people and more of the groups than anyone else. Kim, for instance, is only connected to her little team, and Case, Brogan and Rodrigo are also minimally connected. Alexis, though she is the boss, has connections to the top of each team, but the information she gets is highly filtered. Not surprisingly, Alexis also goes to Eva for advice.

And who is Eva? She’s actually just another software engineer, but one that somehow has built a network that gives her insight and influence. The important thing to learn from Eva is not that Eva has some characteristic or trait (or even a combination of these), but rather that the network provides independent information that helps predict who has got power beyond observable traits.

Lesson #1: The real way that work gets done in a company is represented by the informal network.

The above example is illustrative of how networks provide different information than the org chart or people’s observable characteristics. There is an entire science on interpreting and analyzing these network graphs (sometimes called sociograms). 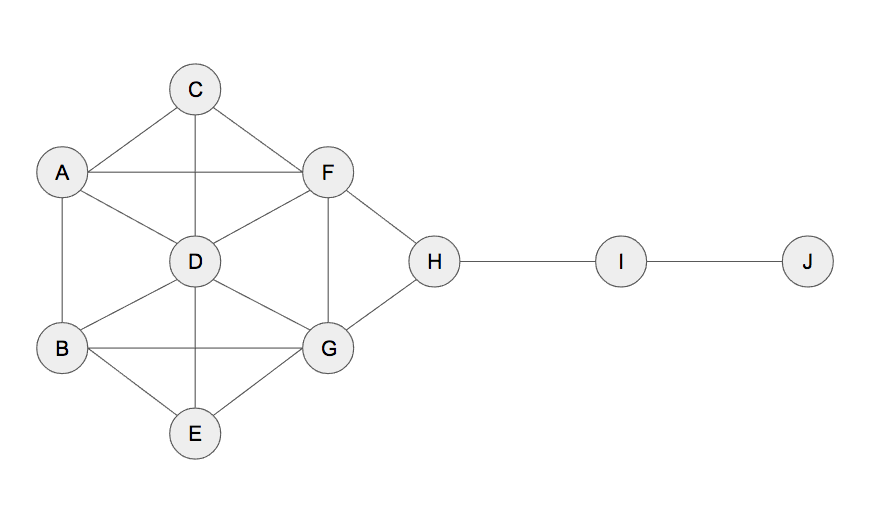 Above is a stylized network, called the “Kite Network” developed by Professor David Krackhardt of Carnegie Mellon University. 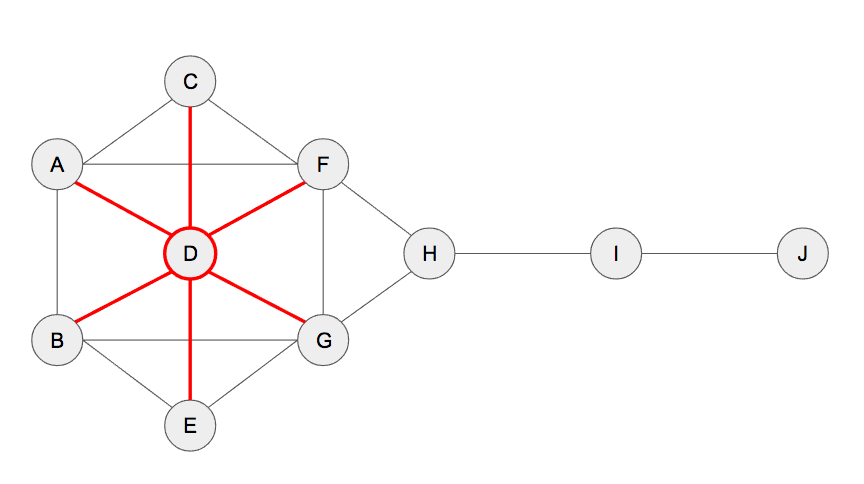 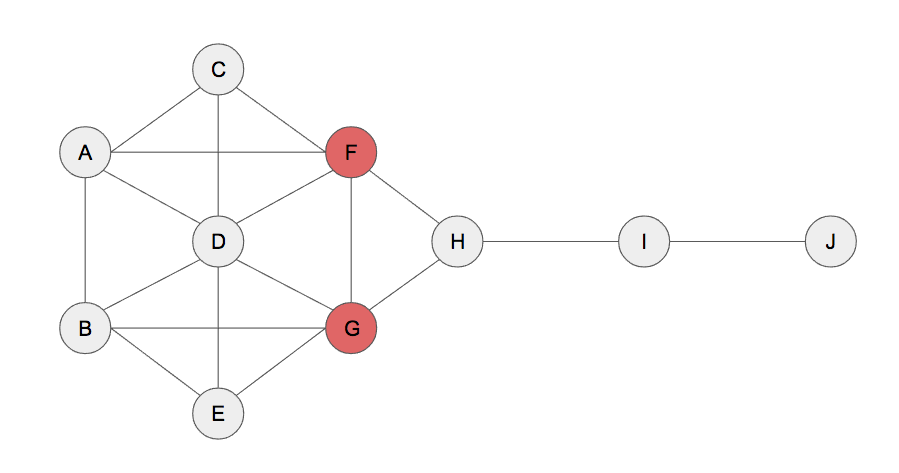 Another answer is either F or G. The centrality of these nodes is a bit harder to see. They have what is called Farness centrality. If you count up the number of “hops” on the network it takes to get from one node (say, A) to all other nodes (B … to … J) and take the average, you get farness centrality. F and G have the lowest farness (or highest closeness) which means it takes a lot less time for information (or disease) to get from F and G to everyone else. Research has shown that Farness/Closeness is correlated to how fast ideas, knowledge, information spread out from a starting point. 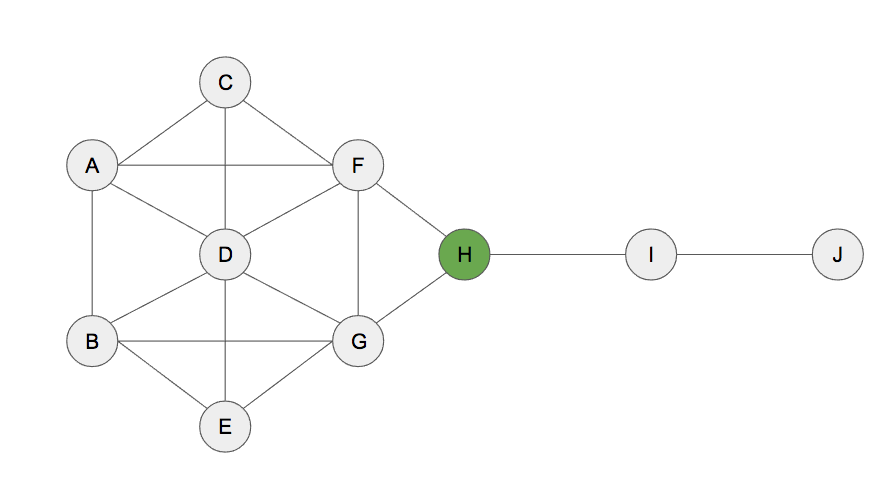 Finally, H has what we call Betweenness centrality. Betweenness measures the extent to which information must travel over a certain node in order to get somewhere else in the network. In other words, nodes high in betweenness are bridges that connect otherwise disconnected parts of the network.  There is a extremely large body of research showing that individuals who are high in betweenness have access to diverse information in their organizations and are often the source of creative ideas, have greater bargaining power, and experience superior career outcomes.

Lesson #2: Power accrues to those who are central in the informal network.

Now that you know some of these concepts, it might be useful to draw out your own network. Here is a short assignment you can do to understand your network better.

All of the analysis above is premised on the notion that a manager can actually see the informal social networks of the people they are managing.

Research suggests that most people (including managers) do not accurately perceive the social networks in their companies. Indeed, there is growing evidence that people are even wrong about their own friendships—that they think think someone is friend, but that person does not feel the same way. However, research (e.g., Krackhardt 1990) also shows that there is substantial variation in which managers/employees have more (or less) accurate perceptions about a network. Managers with better perceptions are more powerful—i.e., better able to get things done.

Consider Silicon Systems (from Krackhardt (1992)) a technology company undergoing some organizational turbulence because of the not-so-friendly behavior of one of the managers, Ev. The situation at Silicon Systems had gotten so bad that the technicians working under Ev wanted to form a union to protect themselves from him. 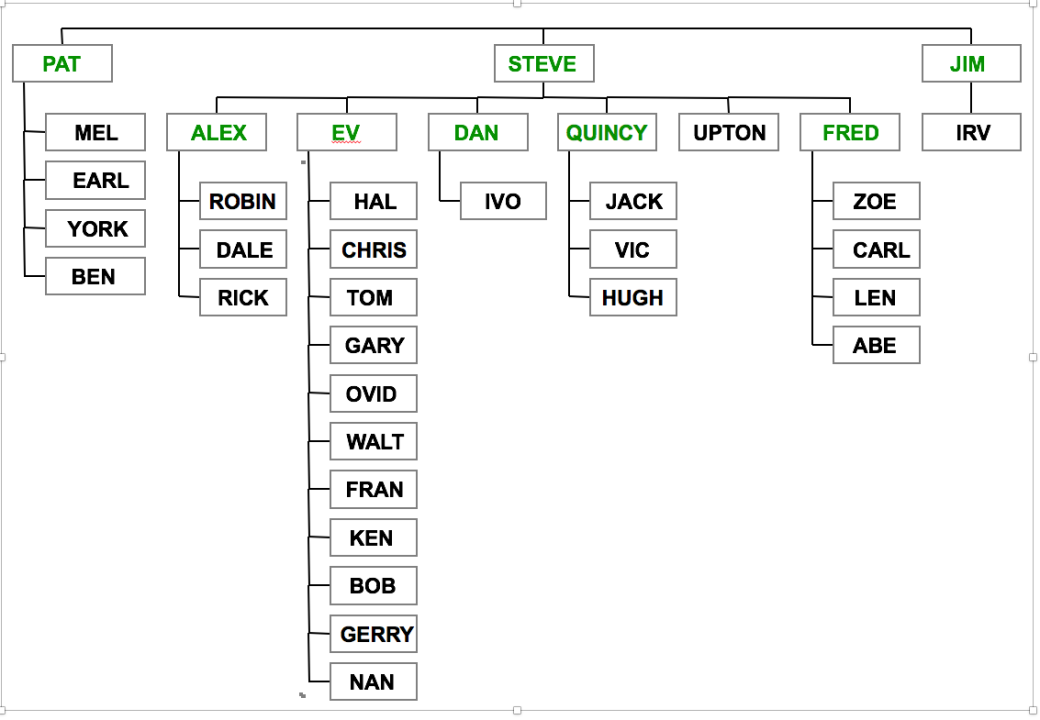 The story of Silicon Systems is interesting and you can find more details here. The short of it, however, is that a lot of the managerial problems at Silicon Systems were in part due to the poor perceptions of the social network—by the manager in question, but also by the top leadership.

Here is a visualization of the “actual” advice and friendship networks at Silicon Systems. They were constructed by asking people who they sought advice from and who they considered friends at the company. 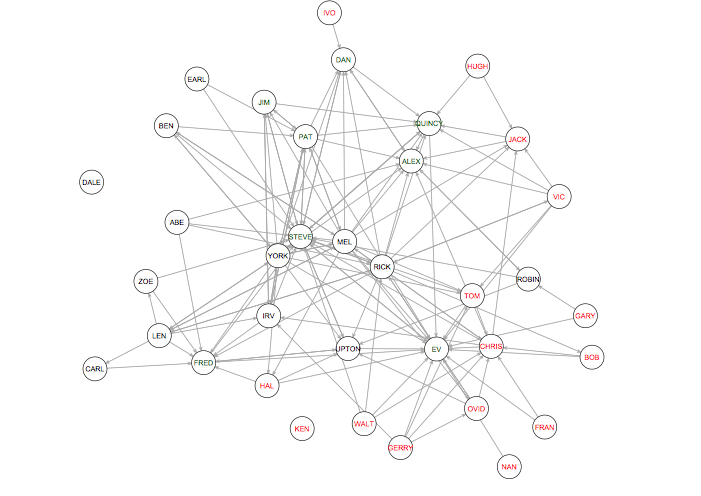 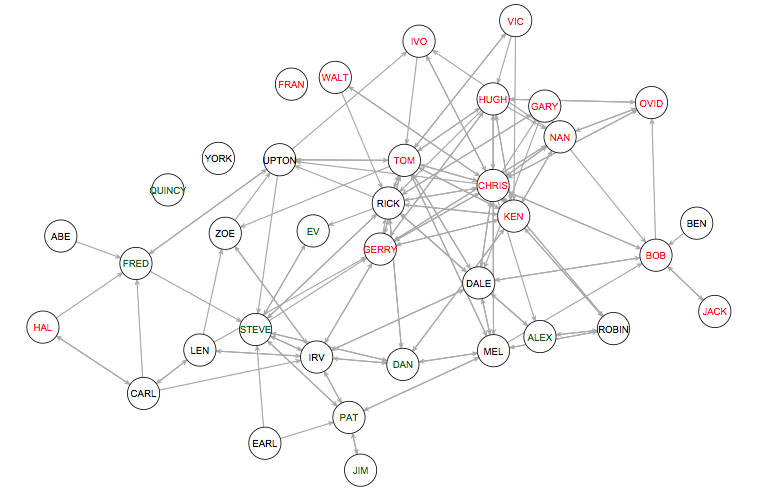 By looking at these two networks you notice two things. The networks are different, but also that in the Advice network, Ev, the trouble manager is much more central than in the friendship network. This is because he is smart and a high performer. However, the workers under him are not particularly happy.

A key player among the technicians working for Ev is Chris. Chris is a nice guy, he’s not particularly charismatic or among the best technically, but people do like him. Chris listens to what people have to say and people trust his judgment and advice. In fact, Chris’s opinion matters to them and the other technicians value his opinion when making their own decisions.

Now that you have seen the advice and friendship networks at Silicon systems. Let’s compare the perceptions of Chris (the informal leader) and Ev (the formal leader).

Chris’ perception of the social network at Silicon Systems 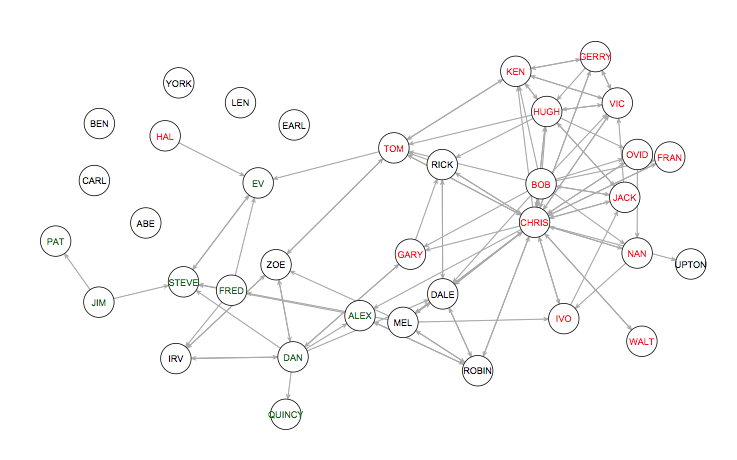 Consider Chris’ network perception. Note how central Chris is in the friendship network. He’s the guy that most technicians trust (you can see that in the friendship and to some extent the advice network above). Though Chris isn’t 100% accurate in his perception, he’s got a decent understanding of the network at Silicon Systems. He is a bit more popular in his mind than he is in reality, though further away from his group of social connections he is a bit more clueless. But he does have some idea about how things work at Silicon Systems.

Now consider Ev, the problem manager. Below is Ev’s perception.

Ev’s Perception of the Networks at Silicon Systems 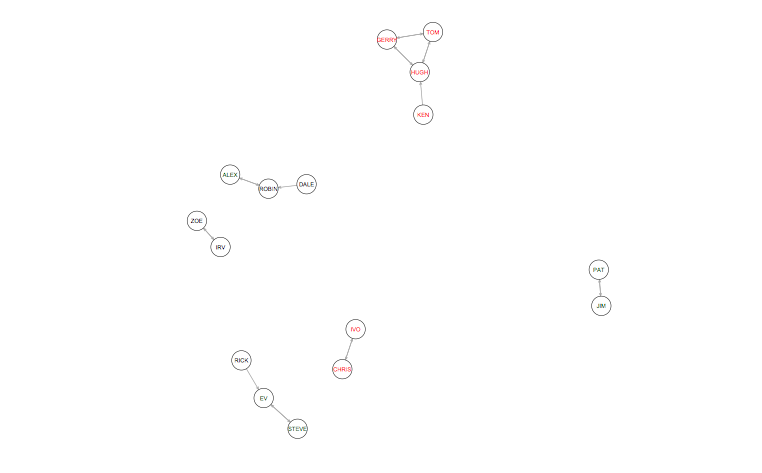 Ev has no clue how things work at Silicon Systems. He has no idea that people are so tightly knit. This affects his ability to manage well and definitely weakens his power within the firm.

Ev is a problem. He’s smart, productive, and critical to the firm. But he is clueless. If you were Ev’s boss, what would you do?

Lesson #3: Power accrues to people who can accurately perceive the informal social networks in their firms.

One thought on “Seeing networks clearly”